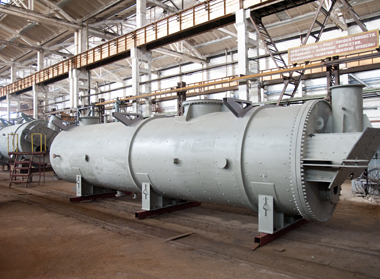 The formation of shipping items which on a step-by-step basis are filled with the structural modules of two triethylene glycol (TEG) regeneration packages for gas drying unit ordered by the German company Ingenieurbüro R. Großmann GmbH & Co. KG. KG. began in “Sumy NPO” PJSC . In general, 16 railway platforms are needed to send these giants.

In the opinion of Andrey Demin, the head of shop number 4, where the packages are made, the project is titanic in all aspects, because this technique affects not only its size (the weight of each of them is 106 tons, in the assembled form, their height reaches almost 20 meters), and technological complexity. “Such complexes are examples of the highest production “piloting”. All of our brigades are involved in their release, each of them is responsible for a separate segment of this monumental equipment, ” the source said.

According to him, TEG regeneration package can be considered to be “four-storeyed”: on the buffer tank, inside which there is a U-shaped heat exchanger and desorption gas coil, a special spacer is installed where a stripping column is mounted, then an evaporator with a flame tube, and, finally, the upper level is a column for the regeneration of glycol, which can not be called simple, given the technology of its production. All this, of course, is fitted with pipelines, fittings, supplemented by instrumentation.

To test the product for connectivity, both complexes underwent a test assembly. After that they were divided into separate components in order to ensure comfortable transportation.

Incidentally, TEG regeneration packages designed for evaporation of moisture from the glycol absorbed during absorption are key elements of gas drying unit. Thanks to this technique, the customer will receive high-quality triethylene glycol with a concentration of up to 99.5%.

In the photo: the constituent parts of the TEG regeneration package – evaporators